Posted on February 5, 2014 by Lina Goldberg
Get a quote for expat health insurance

Five or so years ago there were a handful of small, family-run restaurants lined up next to Kep’s Crab Market, and there was little to nothing to differentiate one from the next. Then Lonely Planet anointed Kimly the best of the bunch, and it quickly became the most popular place on the strip. Many expats won’t eat anywhere else and others refuse to eat there because they claim a Lonely Planet recommendation is the kiss of death. Over the last few days we at Move to Cambodia decided to eat as much crab as possible and see which of the Kep crab shacks came out on top.

It isn’t easy deciding where to eat on Kep’s Crab Row. We’re here to help.

We stopped by Kimly on the last day of Chinese New Year and the place was packed to the rafters with both tourists and local families gorging themselves on seafood. The crab dishes are undeniably tasty, especially the stir-fried crab with green pepper. Kimly has a “secret sauce” for their seafood dishes, a sort of sweet Cambodian curry that they only slightly alter for their various dishes. It’s tasty, but it masks the flavors of the Kampot pepper, which should be the star of the meal. Moreover, when you get a few of their dishes and they come out with a very similar version of the sweet curry it does get repetitive. The crab dishes cost $7.25 for a small plate that consists of two crabs. 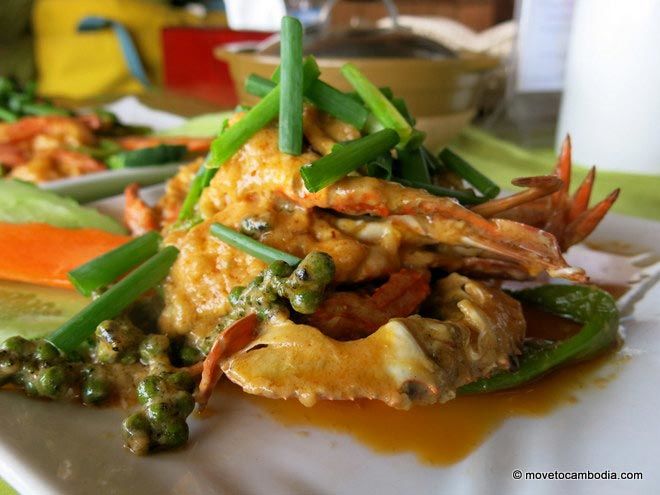 We ordered the crab with green pepper (really good), prawns with fresh coconut milk (pretty good) and Chinese kale (inedible). We sent the Chinese kale back because it was so overcooked that the only person who would have enjoyed it was a teething baby or geriatric. They brought another one out that appeared to be the same dish we had sent back, just chopped up into smaller pieces. It was so mushy that we didn’t eat it and I’m confident that no Cambodian–even the chef that prepared it–would have eaten it either. Service was awful, but that could have been because the place was packed for Chinese New Year. On the plus side, they sell Beer Lao in the big bottles, which aren’t easy to find in Cambodia. Overall, not as good as I remembered from several years ago and certainly not as good as their reputation.

After lunch at Kimly, we waited until we weren’t uncomfortably full and headed to Srey Pov for dinner. In the interest of fairness, we ordered crab with green pepper here as well, and were very happy with the results. The sauce wasn’t sweet, which was a relief. Clusters of green pepper adorned the dish and the pepper flavor was more prominent. If the goal was to try Kampot green pepper, this is a better option because the spicy, peppery flavor is more prominent in Srey Pov’s version. We also ordered squid “with the hot oil” which turned out the be deep-fried squid served with freshly-made sweet chili sauce. Finally, we got stir-fried mixed vegetables, which were the same as any other mixed vegetables in Cambodia but decidedly better than Kimly’s veggie offerings. Srey Pov is the favorite of one of my long-term expat friends, who says the food is marginally better than Kimly and is much cheaper–a small crab dish costs $5. Overall, I thought Srey Pov was a better option and very good value.

We stumbled into So Kheang after a few sunset drinks at La Baraka. The place was empty and we were slightly apprehensive as the staff seemed unsure of whether or not they were open and once they decided that they were, whether or not they had the ingredients to make any of the dishes on their menu. We ordered the crab with green pepper to see how it would hold up to the other restaurants’, and our waiter promptly hopped off the deck into the nighttime water and retrieved two live crabs out of the restaurant’s crab traps. This, we felt, bode well for the meal and we were not wrong. The crab with green pepper was the pepperiest of them all–the flavors of the crab and the pepper were the true stars of the dish, perfectly complimenting each other and unmarred by any competing flavors. Perhaps it was the sunset cocktails talking, but to my palate this was the best of all of the crab shacks and it was also just $5. Prices at So Kheang were very affordable and the service, although shy at first, was really friendly. Recommended. 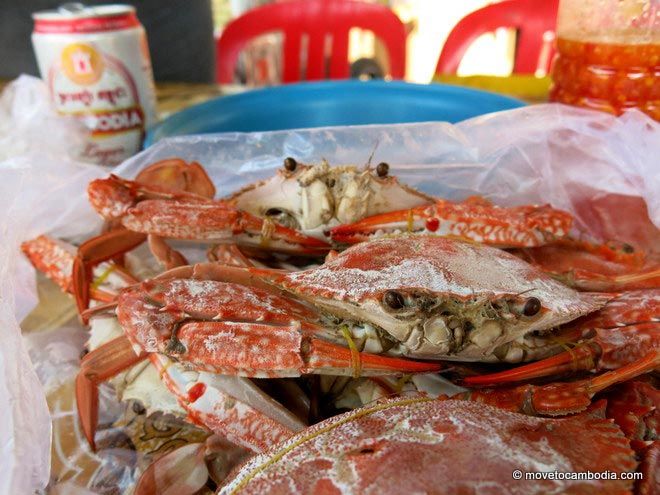 The best value for money can be bought directly from Kep’s crab fishers.

Finally we decided to skip the crab shacks altogether and head to the Crab Market to buy our crabs direct from the source. This turned out to have the best results–at Kimly two crabs cost $7.25. For the same price we got seven crabs at the Crab Market that were twice the size. We paid an extra 3,000 riel ($0.75) to have them killed and cooked. Easily the best value and most enjoyable option available. If you’re nervous about trying this method we’ve got a post on how to buy crabs at the Kep Crab Market, down to the last excruciating detail.

3 Responses to Eating crab in Kep: The crab shack face-off