Posted on January 23, 2013 by Lina Goldberg
Get a quote for expat health insurance

Looking to try street food in Cambodia? Check out our new Phnom Penh Food Tours and Siem Reap Food Tours and spend a morning chowing down on the street, at the market, and in small local restaurants.

Every afternoon Cambodian students sit down to enjoy some of their country’s most delicious dishes: its street food. But for expats this is one of the least savored facets of Cambodia’s generally under-appreciated cuisine. 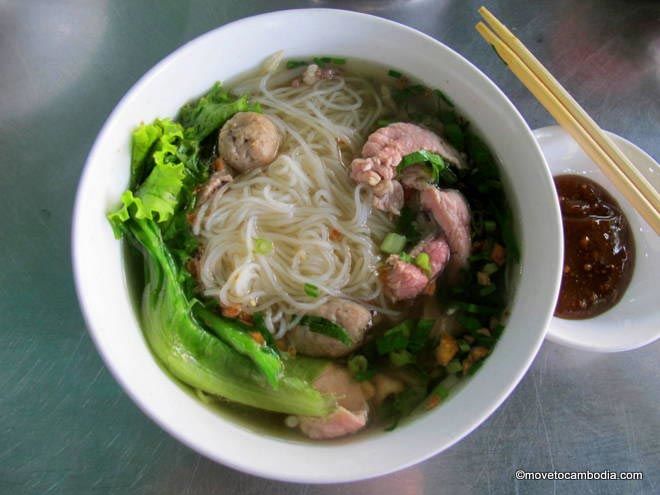 Many expats believe that the Kingdom’s roadside delicacies consist of little more more than deep-fried tarantulas and stir-fried crickets. Concerns about hygiene also keep some foreigners from indulging.

But the best street food isn’t about bugs–either the edible or intestinal kind–and it’s too good to miss. You just need to choose wisely. The safest street foods are those that are cooked in front of you and served hot, which kills off bacteria. And despite what you may have heard, the ice in Cambodia is generally safe to consume. “Street food has two advantages over food cooked in restaurants: transparency and immediacy. When you eat on the street nothing is hidden; you can judge whether or not the person handling your food, the surface on which it’s prepped and the plate on which it will be served is clean,” said food journalist Robyn Eckhardt, who has written extensively about street food in Asia and Turkey for international publications. “And because the time from stall to table is just seconds, you can be confident that your food hasn’t languished long enough to collect the odd bacteria.”

Here are some of the safest and tastiest dishes that you’ll find on the streets of Cambodia. Although they are usually sold at street-side stands and by roving vendors, you’ll also find them at the food area at Central Market, which has grown-up-sized seats and perhaps slightly higher hygienic standards. 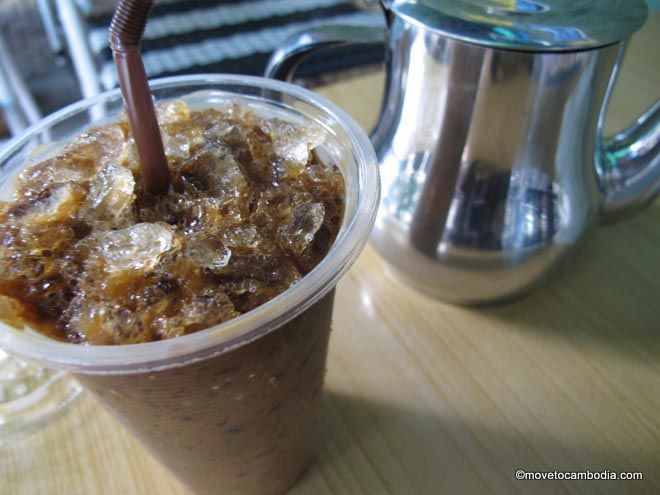 Perhaps the easiest introduction to street food is its beverages. The thoroughfares of Phnom Penh are lined with coffee shops selling kar-fe toek doh koh toek gok, or iced coffee with sweetened condensed milk. If you’re like me, knowing that the beans are roasted in lard makes the sweet, strong coffee taste that much better. Some choose to have it without the condensed milk, but they underestimate the mental clarity aroused by the tingling of dental cavities caused by the drink’s unabashed treacliness.

Fried in shallow pans by mobile street vendors, num kachay are small chive cakes, made with glutinous rice flour and served with a sweet, spicy fish sauce. You’ll find similar versions of this dish in Thailand, but the recipe is believed to have originated in China. 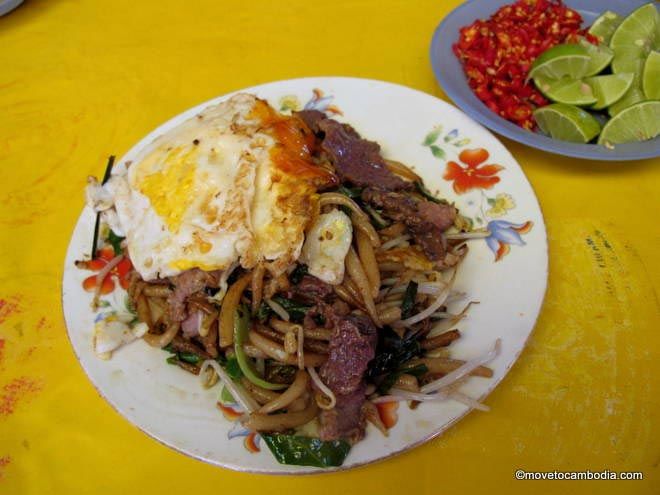 Not the most visually appealing, but fried noodles are some of the cheapest, most filling street food in Cambodia.

Variations of fried noodles abound in Cambodia, but whether they’re made with short, thick rice noodles that resemble worms, soft yellow egg noodles or packaged deep-fried instant ramen noodles, mi char is one of the simplest and most satisfying afternoon snacks. While sellers have many different variations, beef and pork stir-fried with tender greens are the most common. For an added treat, ask for a fried egg on top.

One of the most popular breakfasts in town, kuy teav is a noodle soup made from pork or beef bones and rice vermicelli and topped with fried shallots, green onions and bean sprouts. Fish balls and pork are usually added, although you’ll sometimes find rare-beef kuy teav as well. But don’t dare call it pho! Many Cambodians believe that the dish originated in Kampuchea Krom–the area of Southern Vietnam that was once part of the Khmer Empire–and that the famous Vietnamese soup came second. A delicious Phnom Penh speciality version of the soup, kuy teav Phnom Penh, featuring blood, liver, intestines and tongue, is not for the faint of heart (or squeamish expats).