Posted on March 5, 2013 by Lina Goldberg
Get a quote for expat health insurance

A definitive Cambodian breakfast or afternoon snack, num banh chok is so ubiquitous and well-loved that it’s often known simply as “Khmer noodles.” If you ask an average Cambodian about the dish, after telling you how delicious it is he’ll patiently explain to you that actually, China didn’t invent noodles, they got the idea from num banh chok. 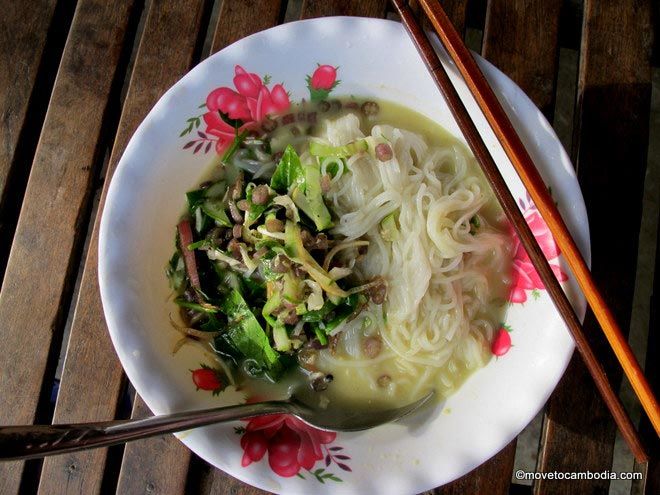 Num banh chok is the name of the noodles that are laboriously made by hand in heavy stone mills from fermented rice, but it’s also what the dishes made with these appetizing noodles are called. In its simplest form, num banh chok, sometimes called num banh chok samlar Khmer,  is the perfect dish to eat in warm weather: rice noodles topped with a cool fish gravy and crisp raw vegetables including cucumbers, banana blossom, and water lily stems and fresh herbs, such as basil and mint.

Before the war, Phnom Penh’s most famous num banh chok came from a small town 15 kilometers outside of the city. In her book Cooking the Cambodian Way, Narin Jameson writes, “The dish was made from the very tasty fish in the Kampong Kantuot River, which runs through the town…the sellers made their own rice noodles and used vegetables from their own gardens. The only cost for this business was transportation from Kampong Kantuot to Phnom Penh, which was very little in the 1950s.”

Of course there are also many regional variations to the standard num banh chok. There’s Kampot-style num banh chok, which relies on locally-produced sweet dried shrimp, coconut cream, fish sauce and peanuts. Siem Reap has its own version, which has more garlic and coconut milk than the original, and is served with a sweet sauce called tik pha em. Sometimes, num banh chok is served with a curry chicken sauce made with shrimp paste and yams. Another version, num banh chok nam ya, features a red fish curry, and is a delicacy often served at ceremonial occasions such as engagement or wedding ceremonies (if weddings aren’t your thing, you can also find it at the Russian Market).

Even the royals have their own version, num banh chok samlar makod, or rice noodles with crown sauce. The version cited in the most definitive English-language Khmer cookbook, The Cuisine of Cambodia by Nusara Thaitawat, comes from the first Cambodian cookbook, Princess Rasmi Sobhana’s opus, The Cambodian Cookbook, released by the American Women’s Club of Cambodia in 1965. The royal version reflects the international taste of the royal household at the time and is made with chicken livers, Cognac and green peas.

But num banh chok‘s history is far older and more storied that just one Cambodian princess. A popular Khmer folk legend about Thun Chey — a celebrated revolutionary and scholar — features the dish. In the legend, Thun Chey was effectively exiled from the Khmer Empire to China by the Khmer king who was scared of his power and popularity. In China, he was forced to resort to making a living selling num banh chok. Of course such a delicious dish quickly gained popularity with the Chinese, until even the emperor of China had heard about it. The emperor requested that Thun Chey bring the noodles to the palace, and while the emperor was tasting them, Thun Chey sneaks a look at the emperor’s face, an act that is strictly forbidden.

Predictably xenophobic, Thun Chey declares that the emperor of China looks like a dog as opposed to the Khmer king, who looks like the moon, and is promptly thrown in jail, only to cunningly manage to be released and sent back to the Khmer empire soon after. Most Cambodians are familiar with the story of Thun Chey, and many will say that this is where China got the idea for noodles and the undeserved glory resulting from their invention.

If you want to try what may be the world’s first noodle yourself, you can find women walking around Phnom Penh in the mornings and early afternoon selling bowls of num banh chok out of baskets hanging off poles balanced on their shoulders, as well as at local markets including Psar Kandal and Psar Thmei.