Posted on October 1, 2012 by Lina Goldberg
Get a quote for expat health insurance 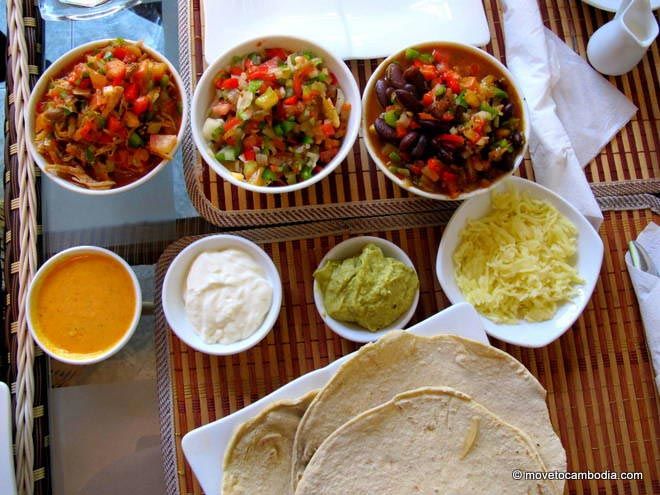 Everything you need for delicious tacos and burritos at La Cita in Phnom Penh.

In case you’re worried that you’ll be giving up the simple pleasures of the Western world when you move to Cambodia, let me be the first to assure you: yes, we do have tacos.

There’s a plethora of California and Texas-style Mexican food in Phnom Penh, which is perhaps one of the greatest advantages to the surprising number of American expats there are in town.

Many Phnom Penh bars offer a Mexican food menu; Garage is at the top of my list — the owner, Jeff, hails from Southern California and cares deeply about the authenticity of his offerings. You won’t find lettuce on his tacos, just heaps and heaps of carnitas and al pastor marinated in pineapple juice, cilantro and onions. At just $3.50 for two, they’re great value.

My favorite Mexican joint in town is La Cita. It used to go by the name La Cita Rendez-vous, which was good for chuckle, but they’ve recently changed the name to La Cita Urban Mex, probably because everyone thought it was a brothel before. The owner, Richard, is from Chile and he’s constantly tinkering with the menu and the marketing of the place. His style is not that of a California taco truck, but it’s delicious. His tacos may be made with flour tortillas but they’ve got the best fillings in town — try the carnitas — and the burritos are even better. Priced at $7.49 for a small (and a small is BIG) the place even satisfies picky Californians who think they know more about Mexican food than you do. They also serve a few Chilean specialities.

Dark horse in town is Viva! I say dark horse not because it’s little-known, quite the opposite. Originally from Siem Reap, Viva! opened a branch in Phnom Penh last year to much ho-humming. The place was known for being boring and bland, and most expats went there for one thing and one thing only: $1.50 frozen margaritas. But I’ve caved in and ordered the wet burrito a few times and it’s actually pretty damn good and only $5.50 (be sure to ask for sour cream on the side for an extra $0.50). They also have $1 tacos which aren’t the best tacos in the world but are quite large and make a good-value snack after a few margaritas.

Edit 10/31/2013: Since this post was written, I have a new favorite, Alma Cafe. Check out the Move to Cambodia review here.

16 Responses to The best Mexican food in Phnom Penh