Posted on August 18, 2014 by Lina Goldberg
Get a quote for expat health insurance

8/3/2015:  Sushi Kaihomaru no long has an all-you-can-eat sushi deal and has switched to an ala carte menu.

It’s no secret that I’m a big sushi fan. And apparently I’m not the only one, because Phnom Penh is awash in new sushi joints. In a desperate bid to set itself apart from the competition, a new sushi restaurant in Aeon Mall is offering all-you-can-eat sushi and all-you-can-drink beer for just $10. Can it be true? Yes, it is. Can it be good? Surprisingly, yes. 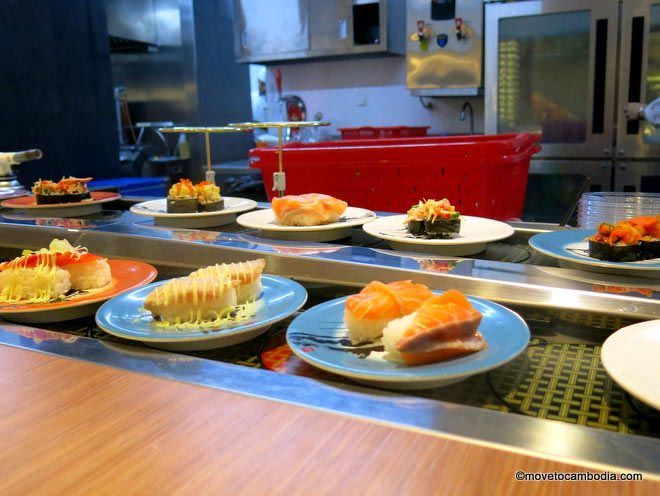 Sushi Kaihomaru is on the second floor of the new Aeon Mall (more, undoubtedly, about that later). They have a conveyor belt sushi bar, as well as tables that seat up to six. The deal is you get 80 minutes of all-you-can-eat sushi and all-you-can-drink Angkor beer for $10. They will charge you an extra $5 if you leave too much rice on your plate–this is to stop people from eating the sushi sashimi-style and leaving two dozen perfectly formed rice balls on their plate. Even if you choose to skip the rice and pay the extra $5, it’s a ridiculously good deal. 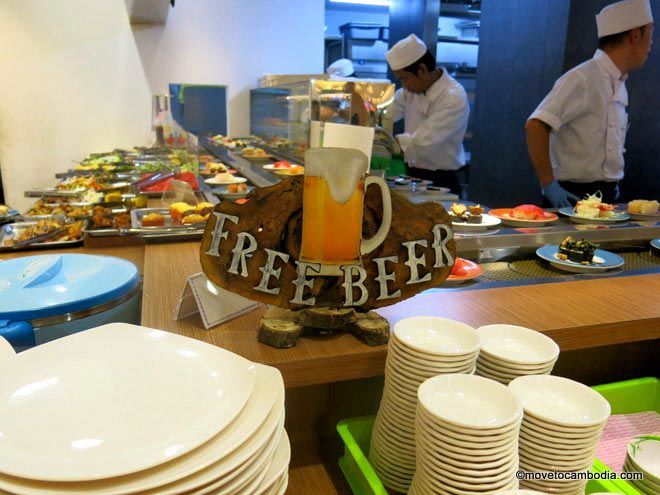 I’m not sure if they’ve been open long enough to know that when two large foreigners walk through the door, they’re going to take a loss for the night, but they were so friendly that I suspect not. The sushi is good quality, with a surprising number of expensive choices including scallop nigiri, which goes for $4 for two pieces at The Sushi Bar. At Sushi Kaihomaru it’s the same quality, but all you can eat for $10. I can’t pretend to understand the economics behind this.

The sushi chefs at are Japanese, as are a fair number of the staff. They say that all of their fish is flown in from Japan and I have no reason not to believe them, other than the fact that the whole thing does not seem financially viable. There’s another Sushi Kaihomaru near Central Market, although they don’t have an all-you-can-eat deal, so maybe…I have no idea. If you can figure it out, let me know. 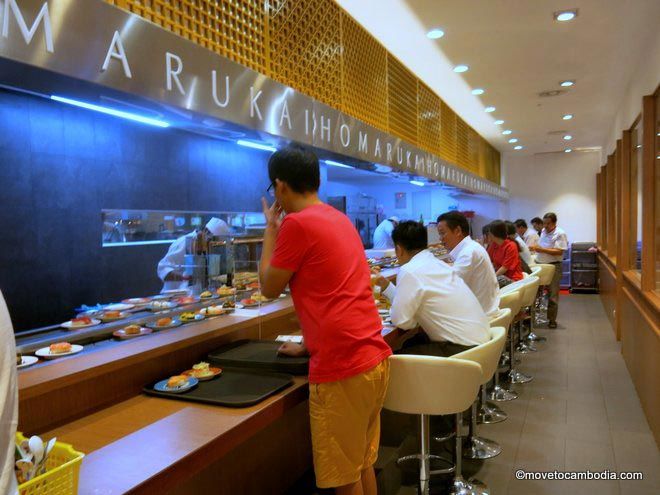 Most of the sushi that comes around is nigiri, with lots of salmon and tuna. It’s not the best salmon or tuna sushi you’ve ever had in your life, but it’s surprisingly good for the price and pretty ridiculous value for money. If you sit around long enough–and with an 80 minute limit I suspect you’ll try–special offerings show up including raw prawns, salmon roe, and octopus. They’ve also got some strange maki creations, many of which involved sweet corn, that I was unwilling to try but which I saw many Cambodian families appreciatively consuming. 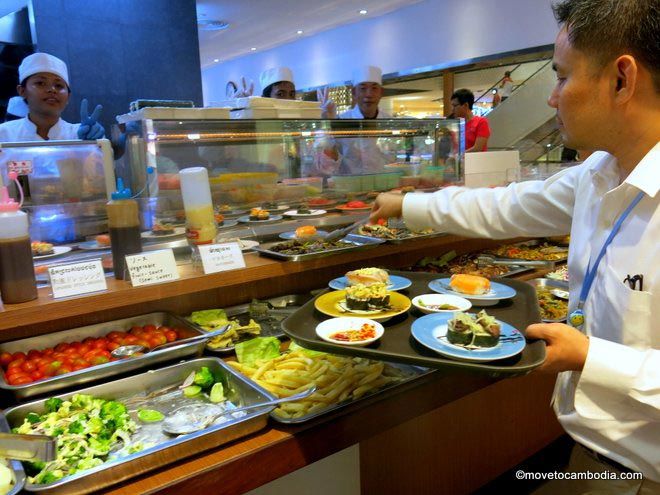 There’s also a small hot food bar with cooked food including miso soup, udon, noodles, tempura, fried mackerel and beef. Again, for the price it seems impossible that they’ll be able to stay in business if they have very many hungry Western customers.

Overall, Sushi Kaihomaru offers excellent value for money, even if you’re skipping the beer and drinking free-flow tea and soda. The staff was friendly, the beers came faster that I’d expect (although you’ll have to ask for a refill each time) and the sushi selection was surprisingly diverse. I know I used the word surprisingly a half-dozen times in this post, but that’s because I was actually surprised by the whole operation. I don’t expect this bargain to last, so go soon.