Posted on July 22, 2014 by Lina Goldberg
Get a quote for expat health insurance

We’ve gotten reports that Hanami is now closed. Stay tuned to see what pops up in that location next!

Sushi, pizza and much more (than you can eat) at Hanami Buffet in BKK1.

There’s been lots of expat chatter about Hanami Buffet. Not surprising, because the array of food is pretty great. They have a pizza and pasta bar, where you can order mysterious pizzas such as the “curry taste” pizza, which was doused in sweet Japanese curry and corn. It was sort of disgusting but strangely addictive. The pastas are also somewhat disappointing but oddly compelling. We tried a salmon pasta that was bland except for the liberal chunks of salmon, an ingredient you don’t expect to see on a cheap buffet menu in Cambodia. It may have been flavorless, but didn’t stop us from finishing it, though.

Hanami also have a sushi carousel that had surprisingly decent sushi options. Much of it was the rice and cooked fish variety, but there were also pieces of salmon and one could easily get their money’s worth just sitting by the sushi track and hoovering piece after piece. 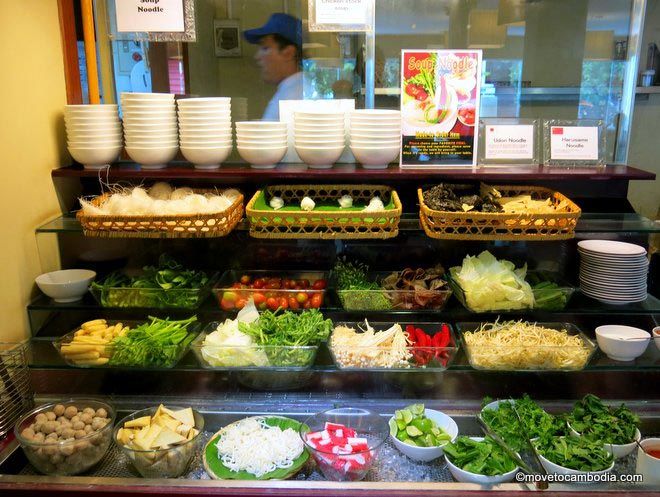 There’s also a noodle soup bar with loads of fresh vegetables and soup options, a congee station and several other areas featuring different types of dishes. Most of the cuisine is Japanese, with a focus on Chinese and Japanese homestyle and izakaya dishes with lots of deep-fried and snacky goodies, including takoyaki (Japanese octopus ball), tempura, and deep-fried chicken feet that make the $1.50 free-flow Angkor beer option seem like a good choice.

Finish up with a selection of desserts, including cake and chocolate mousse. If you don’t feel sick by the time you’ve finished, you’re doing it wrong.

Hanami brings together the Japanese and Khmer cultures in a glorious celebration of gluttony.

The regular prices are $9 for lunch and $21 for dinner, but they are currently having a special with lunch for $6.50 and dinner for $16. Meals includes free-flow soda and tea, and for an extra $1.50, you can add free-flow Angkor beer.

Hanami Buffet certainly does not have the best Japanese food in town, but in terms of value for money, it can’t be beat. Get there relatively early for the best selection and be prepared to wash your hands before entering (don’t worry, they have purpose-built sinks for just this reason).