Posted on November 20, 2012 by Lina Goldberg
Get a quote for expat health insurance

One of the very few areas in which Phnom Penh has not lived up to my outlandish expectations has been in its sushi and sashimi offerings. While there are many excellent homestyle Japanese restaurants, few of Phnom Penh’s sushi restaurants have as much to offer as what you’re probably gotten used to at home (as long as home isn’t a landlocked developing country). And while Kanji, the latest addition to to Phnom Penh’s Japanese food scene, probably isn’t going to give London or New York a run for their money anytime soon, it outshines the other sushi offerings in Phnom Penh. 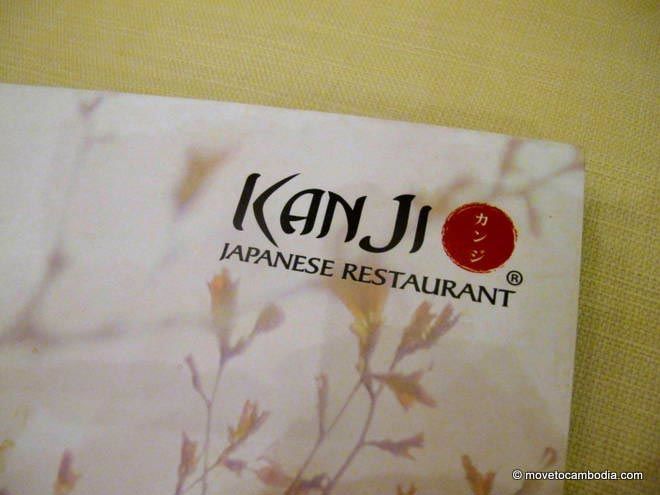 Kanji Japanese Restaurant is Cambodian celebrity chef Luu Meng’s latest venture. Like his other restaurants (Malis, Topaz and Yi-Sang) the culinary delights at Topaz don’t come cheap. The restaurant is definitely on the upscale side, perfect for impressing a business associate or romantic partner. In a bid to draw the town’s elite, they have three VIP dining rooms, accessible by private lift so that the important types don’t have to rub elbows with the hoi polloi in the main dining room.

Not being in possession of a bodyguard or a gun or a bodyguard with a gun, I had to content myself with eating at a regular table. Allegedly there are also special rooms for teppanyaki as well as a tempura counter, but I didn’t notice, and the staff didn’t mention anything about it when we sat down. 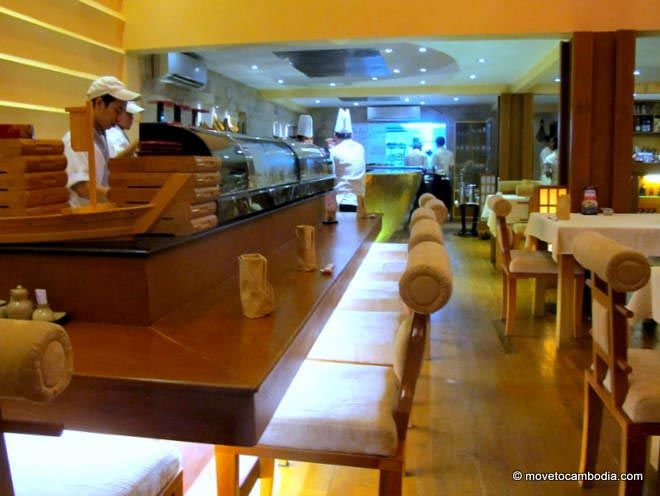 Take a seat at Kanji’s sushi bar, one one the tables available to mere mortals (as opposed to VIPs)

Kanji’s menu is quite extensive, covering the gamut from sashimi to soup and teriyaki to teppanyaki. Prices were expensive by Cambodia standards, but not ridiculous when comparing the menu to similar ones elsewhere in the world. Prices ranged from $9 for tempura or $11 for salmon teriyaki to $28 for makunouchi bento or $14, $22 or $30 for a sushi moriawase combination.

Having heard that they were having fish flown in once per week from Japan, I was pretty skeptical. I’m fairly sure that raw fish cannot last a full week, so I wouldn’t want to belly up to the sushi bar on day six. That said, the dish I ordered, chirashi — a sushi bowl filled with vinegared rice and raw fish– was delicious and great value. Perhaps because they don’t have to bother wrestling the ingredients into nigiri or maki, chirashi is almost always the best way to stretch your sushi dollar at Japanese restaurants. The Kanji chirashi was no exception, being both (relatively) inexpensive at $15 and filled with six or seven types of (relatively) fresh fish. 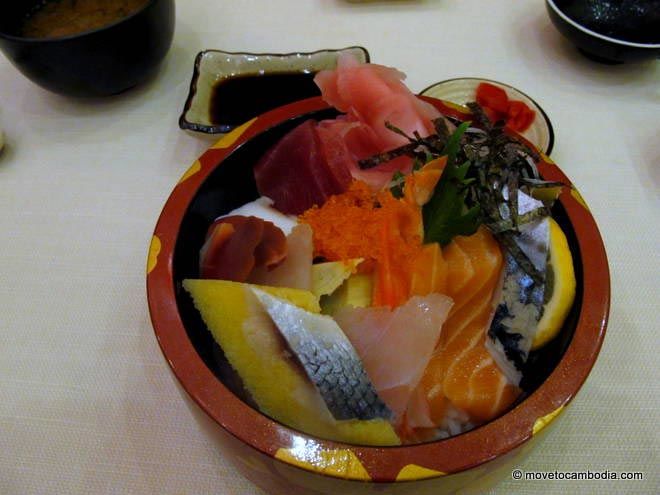 Chirashi — the best bang for your sushi buck.

Relatively, of course, being the operative word here, but for those who have spent as much time trolling the Phnom Penh sushi scene as I have, I will say that the fish on offer at Kanji was better value and more fresh than the other sushi joints in town. They’ve only been open a few months so unsurprisingly, the waitstaff haven’t quite figured out what they are doing, but I’ve no doubt they will get there eventually.

Compared to other places in town, Kanji offers a similar experience to Origami but with larger portions and a more stylish atmosphere. Expect to spend $20-30 per person, which is slightly offset by a free amuse bouche and a nibble of ice cream for dessert (they also have deep-fried ice cream on the menu if that’s not enough to satisfy your sweet tooth).