Posted on January 31, 2014 by Steven Halcrow
Get a quote for expat health insurance

Located in a beautiful Khmer wooden house with a large garden area at the front where they grow fresh herbs, Mie Cafe is a small restaurant on a quiet street on the road to Angkor Wat, just five or ten minutes from the center of Siem Reap. 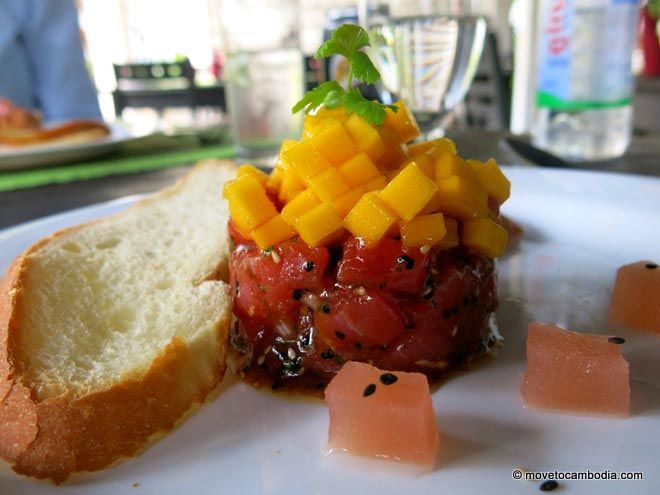 When we visited last week, we were only looking for a light lunch so we focused on the soups and starters (and skipped the page of the featuring the Western dishes,including fish and chips, crusted salmon and the reportedly very good BBQ pork ribs). We ordered two types of tasty tartare — tuna and salmon — which were excellent. Both were very fresh and prepared with obvious care and attention to flavor and presentation. The crab chowder and wonton soup were also incredibly tasty and seasoned perfectly. We liked them so much, in fact, that we ended up passing them around the table so everyone could get a taste. I also had the beef lok lak, which was a more refined version than the typical fast food standard. It was good, but not as exciting as everything else we ordered.

Mie Cafe is located in a traditional Cambodia wooden house with a lovely garden.

The service was friendly and attentive without being overbearing. On the whole, I have found service in Cambodia to be very good despite being fairly relaxed (unlike neighboring Laos where you have to phone a week in advance just to get the bill). I like the laissez-faire attitude that Khmers have to food service, but I still appreciate when a place goes that little bit further to ensure customer satisfaction and Mie Cafe got it just right.

Chef Pola Siv came out to our table after we had finished to see that we had enjoyed our meal. His manner was incredibly humble and made me like the place even more. He gave the impression of a man who genuinely cared about the happiness of his guests — he wasn’t fishing for compliments, just checking that we had enjoyed our lunch. He has a definite creative edge and said that he regularly makes changes here and there on the menu, including overhauling a dish to suit the season, or just refining something slightly to satiate his creative urge.

I discovered after leaving and doing a bit of research that he has travelled far and wide and gained a very wide range of experience from Bahrain to the Caymen Islands, and two years working in Geneva at the two Michelin-starred Domain De Chateauvieux. This experience is very evident in the food that Pola serves. The flavors are very good and well-balanced and the presentation sets Mie Cafe apart from many of the other restaurants in Siem Reap. Even though Mie Cafe is a great place to eat right now, over time, I think it will only get better.