Posted on February 25, 2014 by Steven Halcrow
Get a quote for expat health insurance

In Russia, every household traditionally had a samovar, a heated metal container used to heat water for making tea. You will find ornate versions of these teapots on every table in Samovar Restaurant, a newly opened Russian restaurant in Phnom Penh. 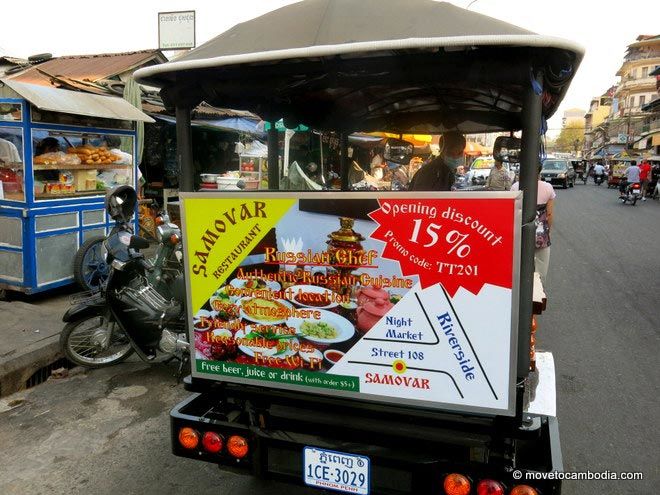 If your partner happens to be reading Mastering the Art of Soviet Cooking and then later sees an ad for Samovar on the back of a tuk tuk, chances up you will end up sitting at one of these tables, under lighted photographs designed to make you feel like you’re looking out a window onto metropolitan Moscow.

When we visited Samovar the other night, there was a Russian family at the next table, which we took to be a good sign. If it was good enough for the Russians then it was certainly good enough for two gluttons who didn’t know any better.

A window onto Russia at Samovar Restaurant, Phnom Penh.

The decor is surprisingly pleasant and when you arrive you are greeted with a welcoming smile  by Cambodian waitresses in bright uniforms that allude to the traditional garb of the Russian peasantry. Russian pop music (including this amazing song, American Boy) plays in the background and mercifully, there is no television.

We ordered five dishes priced between $3 and $5, plus two appetizers that were around $2. The dishes came out one at a time allowing us to share each one. Sharing is, of course, optional. 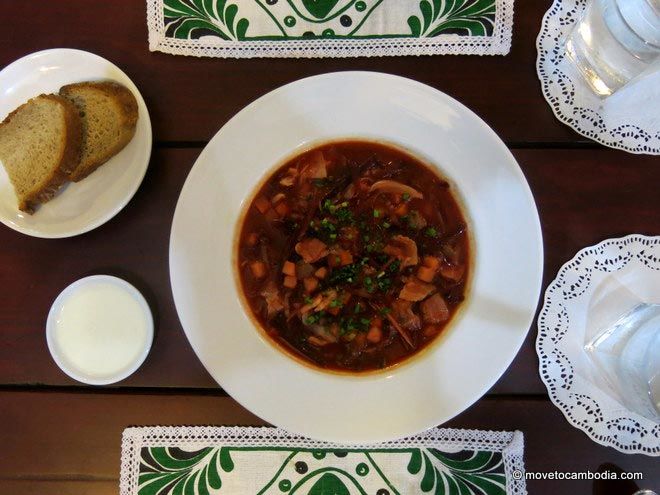 From Russia with borscht at Samovar Restaurant.

As we ate our appetizers of raw vegetables and tasty pickled cabbage and tomatoes we realized that we had no idea what was going to come out and in what order. This was, in part, because we knew nothing about Russian cooking, apart from what had been gleaned from the aforementioned Soviet food memoir. This lent an element of surprise to each successive course, and gave us time to look up each dish on Wikipedia and see what we were eating.

Pel’meni literally translates as ‘ear bread.’ These dumplings are similar to Polish pierogi but they are thought to have originated in China and moved West. Almost every country between Beijing and Krakow has some variation of these meat filled, doughy parcels that are served with smetana (sour cream) on the side. Various fillings are available and at Samovar there is also the option of having them served in a broth . A bowl costs between $3 and $5.

Borscht is perhaps the most well known of Russian foods. It varies from region to region, but usually uses beetroot as the main ingredient. Samovar’s version was so hearty and delicious that I actually found it difficult to stop eating it. In fact, you may get so engrossed in eating it that you forget that you are even supposed to be sharing the bowl with your long-suffering partner. I was still shoveling borscht into my face when the waitress put the blinchiki down for the next course.

Blinchiki are traditional stuffed pancakes with various filling that are just under $4 at Samovar. These are sort of like the Russian version of spring rolls, served with a side of sour cream.

Before eating at Samovar, I had no idea that Russians were so into sour cream, and just when we thought that it was going to accompany every course, the tefteli (freshly steamed lamb meat balls) arrived. They were served on a very generous portion of nicely stewed cabbage (cabbage, like smetana making its third appearance in the meal tonight). On this occasion we were spared the sour cream and served gravy instead.

Hearty portions and great depth of flavor means that you eat very well at Samovar. Finish off your meal with a dessert of blinis and homemade jam, honey or condensed milk and a glass of sbiten (a hot, honeyed winter drink that goes down surprisingly well in Phnom Penh’s heat) and you will go home very satisfied but not stuffed to the point that you hate yourself.

Our visit to Samovar taught me that there is more to Russian food than just borscht and I was glad to learn it from an actual Russian chef, who made an appearance after our meal. The whole meal for two people cost $30 (and could have fed three or four less enthusiastic eaters). The meal was both tasty and outstanding value, especially if you are a fan of cabbage and sour cream.