Posted on February 26, 2013 by Lina Goldberg
Get a quote for expat health insurance

Joannès Rivière, owner of Siem Reap’s Cuisine Wat Damnak and a champion of modern Cambodian cooking, is more than just a master chef. “He’s also quite funny,” a Siem Reap expat told me. 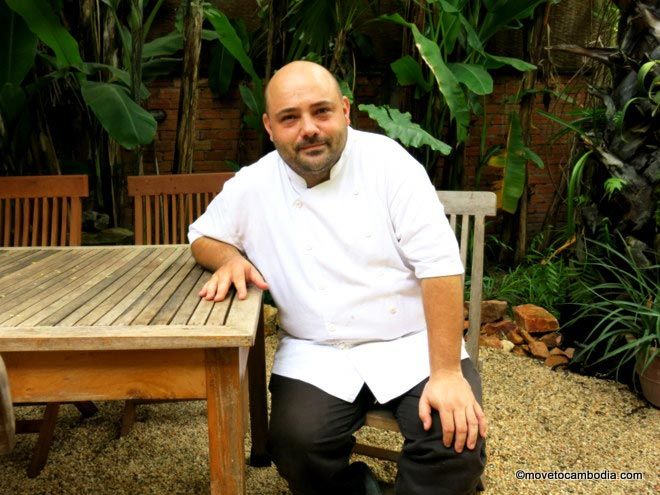 I shook my head in disbelief. “But he’s French,” I protested.

“I know, but he’s actually funny,” she replied, adding for emphasis, “In English.”

As hard as it was for me to believe, it turns out that the man who is bringing Cambodian food to the world’s attention actually has a sense of humor about the whole thing.

For example, when I ask what he would say to critics who believe that Cambodian food is uninteresting compared to the fare in neighboring Thailand and Vietnam, the 33-year-old chef responds, “I guess they should stay there then!” He generously lends me a rare Cambodian cookbook from the pre-Khmer-Rouge 1960s, then threatens to hunt me down and kill me if I don’t return it. But his sly grin shows just how much my anxious handling of his precious book amuses him.

Originally from the Loire Valley, Rivière studied cooking in France before moving to the United States to work as a pastry chef. In 2003 he moved to Cambodia to be a volunteer cookery teacher at the NGO-run Sala Bai Hotel School. His story is similar to that of many expats — he fell in love with the country and has been here ever since.

While at Sala Bai he wrote one of the first cookbooks about Cambodian food to be published in the West in both French and English. From there he went on to become the executive chef at the Hotel de la Paix in Siem Reap before opening his own restaurant in 2011. Since then Cuisine Wat Damnak has developed a reputation as the best restaurant in Siem Reap, and possibly the entire country. 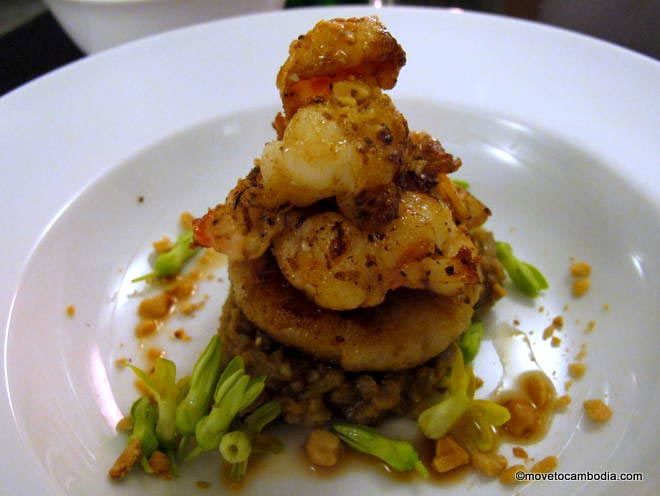 This is just one of five courses. Save some room.

It took me ages to actually get to the restaurant; for those of us entrenched in Phnom Penh, Siem Reap can feel like a world away. But people kept telling me that I had to go, that the food is amazing. Whenever I had guests, I’d send them off to Siem Reap to see the temples and tell them to try what I’d heard was the best restaurant in Cambodia. They’d inevitably come back with rave reviews and gorgeous photos of perfectly cooked local seafood caught fresh from the Mekong and Tonle Sap, and I’d vow that soon I’d make the journey to Siem Reap to try it myself.

When I finally did, I kicked myself for not going sooner. Cuisine Wat Damnak serves two set menus each night, priced at $19 for five courses and $26 for six. Not only was the food as good as everyone had said, but the experience allowed me to consider Cambodian food in a way I never had before.

Rivière’s dishes are truly Cambodian — he doesn’t shy away from using ingredients that most Westerners find intimidating, such as the boldly pungent Khmer prahok — but prepared with traditional French discipline and attention to detail. The results are sublime.

Some of his creations combine Cambodian recipes that aren’t traditionally paired together, like a chewy rice-flake-and-coconut pancake similar to nom krok served with Mekong langoustines atop a bed of minced pork and eggplant, or chaa traop dot, and decorated with edible Tonkin jasmine flowers. While each piece of the dish is true to its Cambodian roots, the combination is uniquely Joannès. 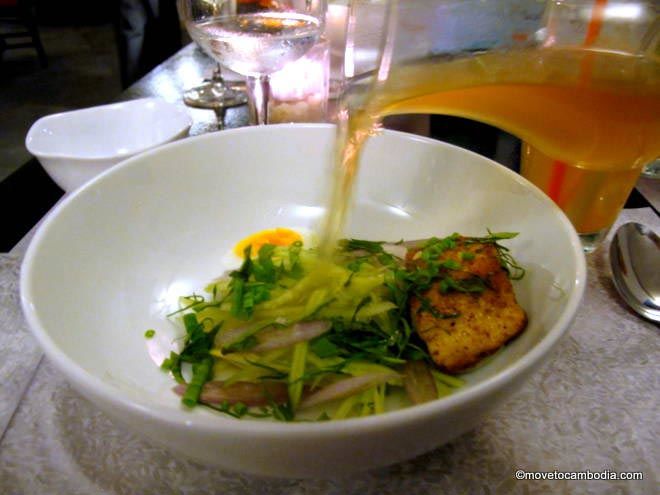 “Out of the pot” soup, as made by Joannès Rivière

Other dishes, like his “out of the pot” soup, are just like what his Khmer grandmother would have made, if he had a Khmer grandmother. The soup has that name because the ingredients–fried catfish and fresh vegetables and herbs, in Rivière’s version with mild green mango, shaved cucumber, crunchy waterlily stems and sweet-smelling lemon basil — are prepared in the bowl and the fish stock is only added moments before the dish is served. Rivière makes some slight changes, though. He floats a halved, perfectly cooked hard-boiled egg in the broth, rather than grating it in. The latter method is traditional but yields a soup that’s distinctly lacking in the gourmet aesthetics that Rivière favors. And his broth is delicate and flavorful  a far cry from the sweet, MSG-laden stock that’s usually inflicted on this homestyle soup.

Some of his more recognizable Cambodian recipes stick closely to traditional ingredients and preparation, but “with the bones removed and maybe a little bit more attention to the cooking,” he says. “Others are based on traditional combinations, but taken apart and put back together. The ingredients are the same, the taste is relatively the same, but the result is definitely different–more modern.”

It’s clear from talking to Rivière how thoroughly he has embraced his adopted home. His Khmer language skills are excellent (although he admits his learned vocabulary equips him to talk about food rather than politics) and his knowledge of Cambodian culinary history and cooking techniques outstrips that of most locals of his generation. Much of his know-how comes from talking with Cambodian grandmothers who happily share their recipes and cooking secrets with him. As a result, this Frenchman has become the foremost Western authority on Cambodian cooking, and a brilliant interpreter of Khmer cuisine.

One of the things that sets his cooking apart from many of today’s Cambodian chefs is that Rivière uses only locally grown produce. He eschews onions, coriander, carrots and potatoes because they don’t grow well in Cambodia and aren’t traditionally used in Cambodian cooking. Although much of the meat sold in Cambodia is imported from Vietnam, all of the pork, beef, chicken, duck, quail, frog, and fish used at Cuisine Wat Damnak is locally sourced. 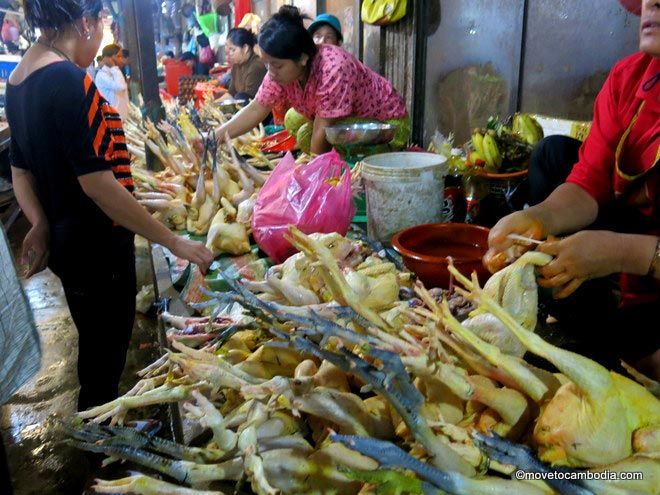 Shopping with Joannès at the old market in Siem Reap

Another distinctive feature of his cuisine is the way he romanticizes rustic Khmer cooking, basing his creations on how things were in days gone by, not how they are now. “I tend to idealize Cambodian food, meaning that I like to exaggerate, in a good way, some aspects,” he says. “For example, when I make braised prahok with minced pork and crudites, I add a pork bone and trotter stock so that it is even more creamy. And for the crudites, I like to use a mix of texture, flavor and colors that is much more dramatic.”

When I ask why his Cambodian flavors turn out so differently from–and, dare I say, better than–average Cambodian fare, Rivière jokes, “Because of my amazing style.” Then he gets serious. “As a foreigner I can allow myself to do things that people would find weird if the chef were Cambodian. Because I am not, I can do whatever I want–as long as it tastes good.”

One Response to Romanticizing the Cambodian kitchen with Joannès Rivière