Posted on January 24, 2014 by Steven Halcrow
Get a quote for expat health insurance

Angkor Muscle Gym is a cheap, local gym that sit on the banks of the Siem Reap River. At $1 for entry (including locker and towel) this is remarkable value for money. Even though the locals only pay 2000 riel, I still find it hard to complain. It may not come with the luxuries of a more upscale gym like air-conditioning or sauna, but the range and abundance of equipment more than makes up for this. That and the flexing. 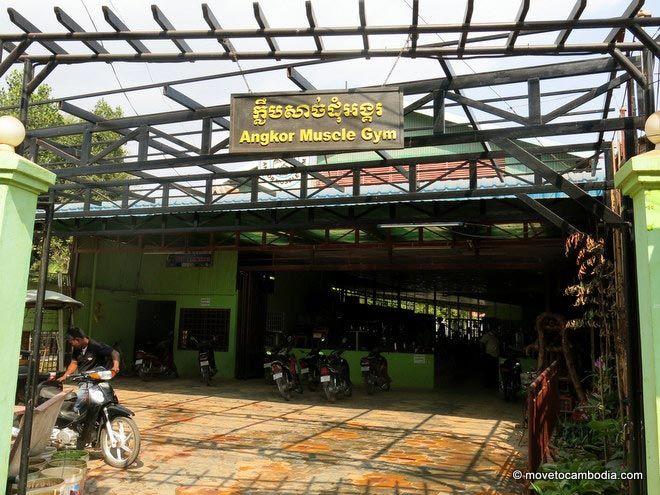 Where Siem Reap’s muscle go to work out.

Angkor Muscle Gym is primarily a body building gym where the emphasis is on free weights and other forms of resistance training. This is made apparent by the fact that there are only a handful of cardio machines, all of which are in perfect working order, probably due to the fact that no one seems to use them very much. (And if you do want to use the Life Fitness treadmill, it costs an additional $1 for every 20 minutes.)

There are a load of dumbbells, several benches (decline, incline and flat) Smith machine, two cable machines, lat pull down, squat rack, dipping stations and pretty much every other type of bench or machine that you could want. This abundance of equipment is great for an efficient workout as even if someone is using the thing you want to use, there will be something else you can use instead that will do the same thing.

There is also a reasonably sized studio area at the back for more aerobic-based workouts and plenty of mats for stretching or pilates/yoga-type exercises. 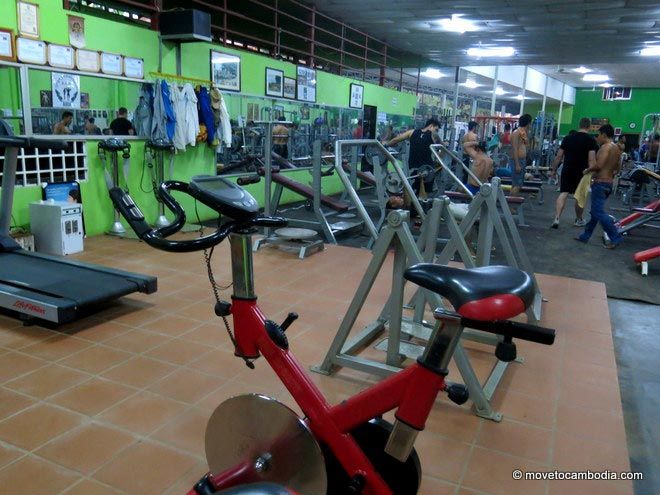 Every time I visited there were at least a couple other foreigners there. Not that the locals would care–they all seem far more interested in checking themselves out in the mirror to worry about what some barang might be doing. Their perpetual flexing meant that at some points it felt as though I was not, in fact, in a gym at all, and instead had wandered into some weird human peacock farm. 99% of the clientele are Cambodian, a further 99% of them are topless and 75% of them spend their rest periods between sets flexing. At any gym I have visited in the UK this would be seen as unbearably vain (most of the people I know will wait until they are in the confines of their bedroom before beginning the gun show), but at Angkor Muscle Gym they are proud to show off their hard work. Some might think that such a concentration of testosterone would have a negative effect on anyone not participating in the flex-a-thon but everyone is having fun and smiling, which in my opinion helps to create a very enjoyable and fun environment in which to work out.

It is a growing scene in Siem Reap and the posters on the wall of the more successful patrons of the gym competing in bodybuilding competitions is testament to the hard work that goes into the place, which is the home of ABBA, the Angkor Body Building Association. Personal training is also available with the same guys that are on the posters and the price I was quoted was a paltry $5 an hour, although I would anticipate a few language barriers.

For women looking for a good gym to use, I would recommend Angkor Muscle Gym but be prepared as the testosterone shot is pretty intense. This actually made my female friend a bit uncomfortable, purely because she was not ready for it. If you are looking for a cardio-machine based workout then this may not be the place. But if you are willing to give it a shot, it will help you relax if you have an idea of what you are doing workout-wise before you go in. Once you start, though, you will realize that the locals care more about their muscles than you.