Posted on June 26, 2020 by Pete Ford
Get a quote for expat health insurance 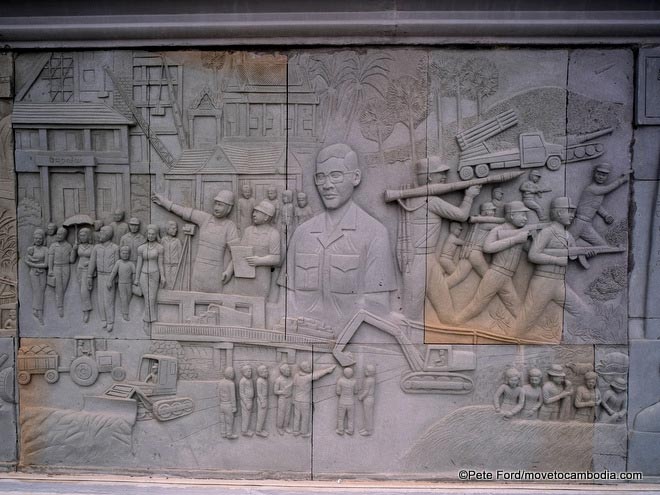 Carving at the Win-Win Memorial depicting the end of the Khmer Rouge era.

Located 20 kilometers north of Phnom Penh, opposite the new national sports stadium and next to a granite-cutting factory and a TV station, the Win-Win Memorial seeks to educate the world about the actions, achievements, and glory of Cambodia’s prime minister, and in particular about his policy of offering amnesty to the motley crew of Khmer Rouge commanders who lurked on the Thai border throughout the 1990s causing trouble.

For those with their own transport, a trip to see the monument is a pleasant bicycle or motorbike ride through little villages and farms along the Tonle Sap. On the way you’ll see small temples, lotus ponds, children playing, piles of plastic waste, and the ever-present pipes and tubes transferring river sand to farmland in preparation for construction. 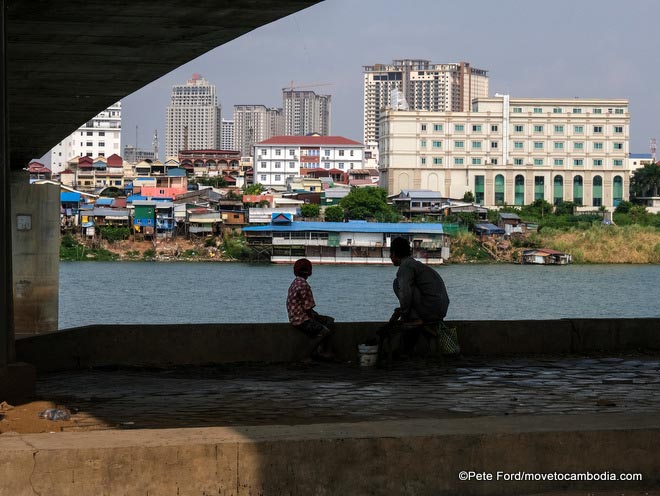 The view of Chroy Changvar from under the Chinese bridge in Phnom Penh.

Along the way are snapshots of the different colors and cultures within Cambodia. The mosques of Chroy Changvar and Russei Keo, the different boat communities, and the varied architecture of old Chinese temples (and, until recently, the only Catholic building to survive Khmer Rouge destruction) and wooden stilt houses: all these things point to generations of habitation and community.

How it will all look by the time the 2023 SEA Games launch Cambodia’s new national stadium is unclear. To dwell too much on the past is to ignore the giant strides that have been made in improving the quality of life for many Cambodians, but that improvement is still visibly unequal — and at what environmental cost?

The tongue of land between the Mekong and Tonle Sap has long been sparsely populated and little cultivated. But the peace, prosperity, and rapid urbanization of the Win-Win years are unleashing unprecedented growth and ‘development’. How much of this is relished by the villagers displaced in the process is unclear. But hey, at least they have a monument to enjoy. 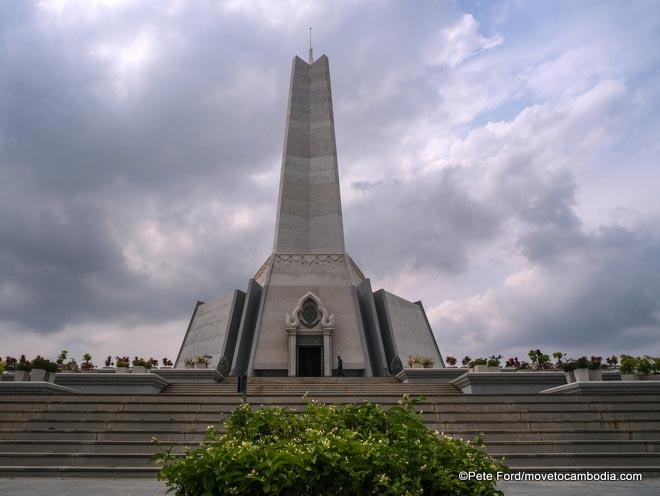 Win-Win is the term coined by the Prime Minister to describe the policy of disarming the Khmer Rouge, and bringing peace to Cambodia — Khmer Rouge soldiers “won” through their surrendered by not dying and being given government jobs, while everyone else “won” by there being fewer Khmer Rouge soldiers.

Around the base of the Win-Win Memorial are a series of carvings that depict various scenes and events from the Hun Sen mythos: his youth in a village, his time as a Khmer Rouge soldier, his return at the head of the Vietnamese army division in 1978 that removed the Khmer Rouge, and so on and so on. Even some of the prime minister’s very recent actions are included, such as taking selfies with garment workers during the 2018 elections. 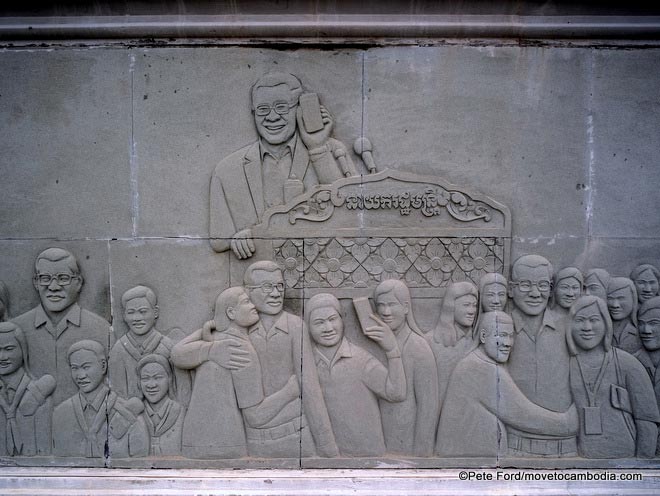 A small park on the southern end houses some Soviet military equipment — a legacy of the 10 years of Vietnamese control of Cambodia — as well as some concrete white birds; because why not! The carvings are still a work in progress, with new additions (and what appear to be some edits) to the stories clearly visible, and the whole place has the air of being unfinished. When I was there, I saw only a few visitors and the nearby food stalls were forlorn, although social media images point to a more lively crowd in evenings and weekends.

The monument is a fascinating window into how Hun Sen’s Cambodian People’s Party sees its role in recent Cambodian history; and how it wishes to project this to the world. A visit is a great excuse to leave the city for a half-day excursion, and a reminder that Phnom Penh is really not representative of Cambodia.