How to get from the airport into Phnom Penh

Posted on January 19, 2018 by Lina Goldberg
Get a quote for expat health insurance

If you’re looking for a great introduction to Cambodia, there’s no better way to do it than to negotiate your transfer to Phnom Penh from Phnom Penh International Airport (nee Pochentong). Be aware that the taxi situation can border on scammy, so it’s good to know what to expect before you go.

As in many cities, you’ll probably have a group of men shouting at you and trying to rope you into various transport options the minute you leave the arrivals hall. Take a deep breath and ignore them. You have three transportation options for Phnom Penh Airport transfers: taxi, tuk tuk, and moto. 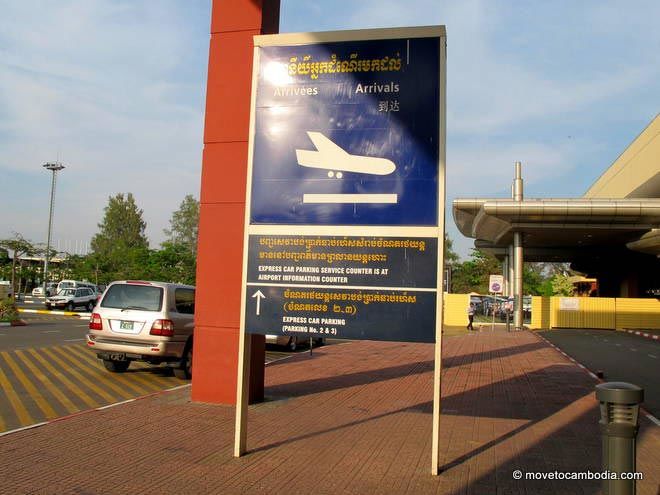 Welcome to Phnom Penh International Airport. Here’s how to leave.

Taxis are the fastest, safest way to get from the airport into Phnom Penh, especially if you’re carrying lots of expensive equipment on you. You can either get an airport taxi or a private taxi.

The airport taxi drivers all seem to speak English, which is handy for new arrivals. If you walk to the curb immediately after leaving the arrivals hall, there will be a line of official taxis waiting.

The trip into town takes anywhere from 30 to 60 minutes, and can take even longer if there’s traffic. From Phnom Penh to the airport it takes about 45 minutes if the roads are clear, but can take take two hours or more in the early evening. Be sure to budget a lot of time, just in case.

As previously mentioned, the airport taxis are a great introduction to life in Cambodia. Despite copious research and several recent visits to the airport, I’m still not completely certain “official” price. But frankly, the official price doesn’t matter, because they probably won’t charge you that, anyway.

The semi-official fee for a taxi into Phnom Penh has recently gone up (again) to $12, $15, or $18 depending on which area of town you are headed to, and they will give you a ticket that says the price before you get into the taxi. An airport taxi to Wat Phnom, the Riverside, or anything above Street 240 will cost $12. Most other locations in central Phnom Penh including BKK and Russian Market are $15, or $18 for places across the river, such as Chroy Changvar.

The previous “official” charge for these three zones was $9, $12, and $15. Expats have reported being able to still get the $12 for central Phnom Penh on occasion, so it’s worth trying if you don’t mind a bit of an argument.

Despite the recent price increase they are still trying to fob off higher priced tickets on unsuspecting tourists, so be sure to know which zone you are in before you agree to a price. There is a map on the front of the taxi booth just outside of arrivals where you can check, or use the guidelines above. Taxis are usually Toyota Camrys that can seat four at a squeeze and don’t have room for a lot of luggage.

Another option is to book a taxi online in advance. The private taxis are significantly nicer — they’re air-conditioned Lexus SUVs that can seat four and have more room for luggage. The cost is $15 or $17 and you don’t need to deal with the Phnom Penh airport taxi mafia.

If you don’t mind waiting around, you can use one of Phnom Penh’s taxi booking apps which offer a less expensive alternative. They also offer tuk tuk bookings, but the tuk tuks only seat two people. If you use a private taxi app, you’ll be able to get from the airport for under $10 in most cases. Check with your driver–sometimes they will wait for you outside of the gate but other times they will come into the arrivals parking lot to meet you.

For an open-air way to travel to and from the airport, try a tuk tuk.

Within the grounds of the airport tuk tuks are also available for the set price of $9. If you’re looking to save some money, you can walk directly outside the airport gates and get tuk tuks into town for about $6 depending on your negotiation skills and how far away you are looking to go. (As a point of reference, you should be able to get back to the airport from Phnom Penh for $6 or $7, despite what your guesthouse might tell you.) You will often pay less by booking a tuk tuk via one of the apps that are now available in Cambodia.

When I first landed in Cambodia I had no idea what I was getting myself into, and that bumpy, breezy ride in the tuk tuk was eye-opening and wonderful. A tuk tuk journey is one that involves all of the senses, and it’s one of the best ways to see Phnom Penh for the first time, even if the drive is a bit longer than in a taxi. However, remember to take care of your belongings when in a tuk tuk and keep your bag under your feet if possible.

Motos are also available outside the airport gates for around $2 or $3. Don’t wear your bag on your back, ask the driver to hold the bag up front or hold it between yourself and the driver. New arrivals are easy targets for bag snatchers, so be especially careful on motos or when you put your bag down to pay for your transport. Do not take the airport motos for $7, it’s a total rip off.

Phnom Penh (finally) has a small public bus system, and it is air-conditioned and stops at the airport! It’s certainly the least expensive way to get into town, costing just 1,500 riel ($0.37). Be sure to have small change, preferably riel, as they will not be able to change bills larger than $1. The bus stops directly outside the airport. When you leave the airport, go straight ahead and once outside the gate, turn right, and you’ll see the bus stop (here’s a a whole blog post just about the public bus system if you want to know more.