Doing nothing in Banlung, Cambodia’s most remote capital

Posted on November 27, 2020 by Pete Ford
Get a quote for expat health insurance

Banlung, the post-1970’s capital of Ratanakiri province (after its predecessor Lamphut was flattened by US air forces under cover of its war next door), is the northeastern gateway to Virachey National Park, Cambodia’s last vast forest, and Vietnam beyond. In between are waterfalls, hikes, and hill tribe villages, all of which normally attract the intrepid and the adventurous. 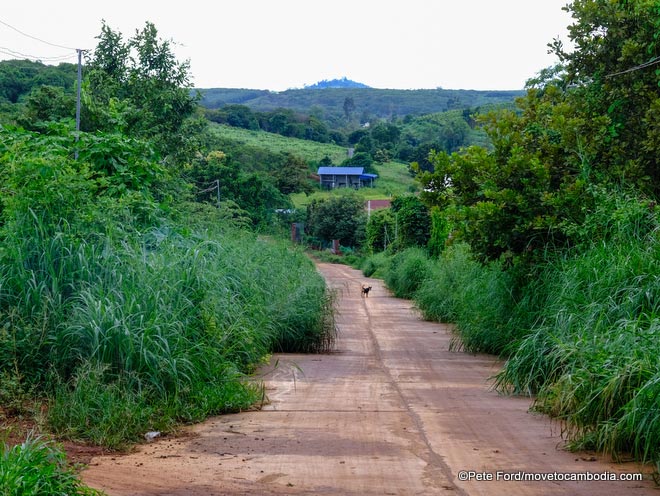 No matter where you go in Banlung, the capital of Ratanakiri, you’re never far from green.

In 1978 it took the Vietnamese army five days to cross east to west from the border to Kratie town, battling not just Khmer Rouge soldiers but also thick forest and a lack of infrastructure. These days, it’s about 5 hours on smooth roads from Kratie up into the hills near the Vietnamese border. The roads have improved, the soldiers gone; and so have the trees, with mile after mile now growing monoculture rubber and cashew.


During rainy season Virachey is closed to trekking and the prospect of damp trudging through leech-infested plantations hardly inspiring, I elected to actually spend all my time in Banlung itself. 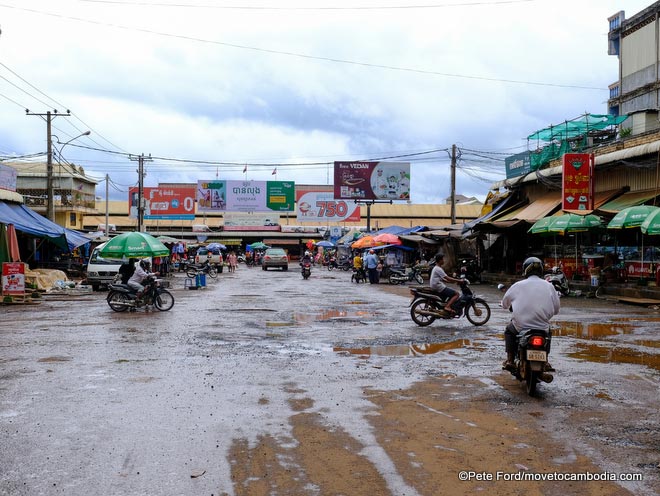 Banlung Market, the center of Cambodia’s most remote capital.

Which put me in a distinct minority at a time when anti-COVID-19 restrictions have ensured basically no tourists in Cambodia. My fellow mountain nomads were the stuff of the rural Cambodia of yore, a ragtag bunch of missionaries, English teachers, and NGO workers (and no other debonair corporate stooges from Phnom Penh as far as I could tell)

Home to some 20,000 people, a large market, and a Sakura Recycle Shop — always the sign of a town’s success in my eyes, and a compulsory visit to see what random old Japanese crap has made its way to rural Cambodia — Banlung has a smattering of hotels, guesthouses and restaurants that punch rather above their weight. 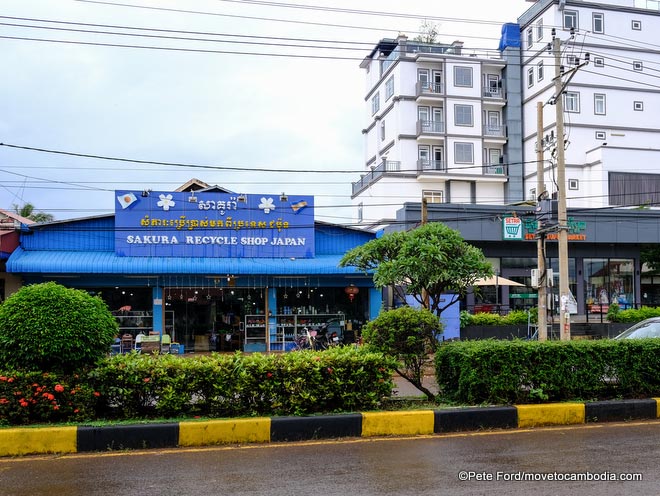 Yes, Virginia, there is a Sakura Recycle Shop.

At the posh end, Terres Rouge offers a nostalgic glimpse of the French-subjugated Indochina that so attracted foreigners to the region 100 years ago (think dark wood, bougainvillea, and psychedelic floor tiles overlooking a quiet lake).

At the opposite end (both of town and atmosphere) is the Tree-Top Eco Lodge, a sprawling collection of bungalows set on a tree-filled hillside; each resplendent with a hammock and a view of nature. It was my home for three nights and where I finally finished Nayan Chanda’s excellent Brother Enemy, from which I took my opening factual nugget. 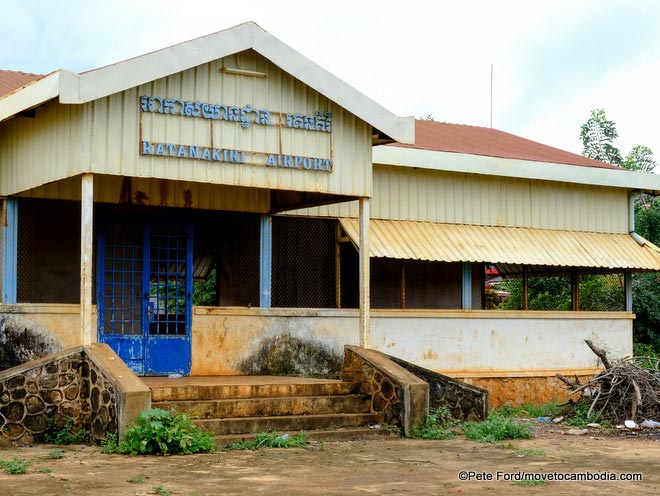 The dilapidated remains of the Ratanakiri airport in Banlung.

When I did emerge for food and exploring, Banlung did not disappoint. While it seems to have suffered from the lack of tourism to the country — shuttered hotels and restaurants a sad reminder of COVID-19s economic impact in Cambodia — but for many, life appears to continue. The hulking market was busy with sellers of clothing and food (including great prices on Vietnamese avocados), and the numerous jewelers were still applying their skills to turning the locally-mined gems into pieces of bling.

The town’s airstrip offers a fascinating look at what was once the fastest way to reach the town from Phnom Penh. Into the early 2000s, flying was the only sane way for people to bring in the words and works of the government (or Jesus), as the bumpy road down to Stueng Treng was a thing of torture for those unlucky to lack the funds to fly.

Today, the overgrown dirt strip is testament to Cambodia’s greatly improved road infrastructure of the past two decades. Similar airstrips in Kampong Cham and Kampong Chhnang lie abandoned (even if Mondulkiri and Koh Kong are being blessed by new ones, and Battambang’s is being rebuilt), and today Banlung’s airport is just scrubland, home to cows, piles of garbage, and a quick shortcut that allows locals to cut across the now-abandoned runway instead of going the long way around. Today, the Banlung Airport airstrip is little more than a shortcut through the area for locals.

Elsewhere in town, brand-new coffee shops point to its popularity with the newly-emergent Cambodian middle-class student class, who are exploring the country in a way unknown to their parents. Whether camping in Areng Valley, learning to kayak in Kampot, or meeting ethnic minority hill-tribes in the far east, it’s been fantastic to watch the growth of domestic tourism activities. In Ratanakiri, it seems the famous crater lakes are the attraction; I was told by those who had been to look that they were packed during the Pchum Ben holiday with joyful groups of young Cambodians, swimming, playing and enjoying nature (and the noise and plastic pollution that still accompanies such gatherings — room for improvement).

Do I advocate travelling the 8 hours from Phnom Penh to Banlung, just to sit and read in a hammock? No, not really, busses are never much fun. And Kratie or Kampot can meet such leisurely pursuits with less bus time. But if travelling in the east or north east, then it makes perfect sense to head up in the greenery to enjoy the cool weather, and to see a side of provincial life that is rapidly being replaced with uniform-sameness elsewhere.

One Response to Doing nothing in Banlung, Cambodia’s most remote capital