Posted on August 16, 2020 by Lina Goldberg
Get a quote for expat health insurance

I’ll admit that despite a life-long love of miniature golf I was skeptical when I first heard about a miniature golf course in Siem Reap filled with scale models of Angkorian temples, maybe because it sounded too good to be true. But luckily it turns out that Angkor Wat Putt is even better than what I could dare to imagine. In fact, it has been on my list of “best things to do in Siem Reap” for years. 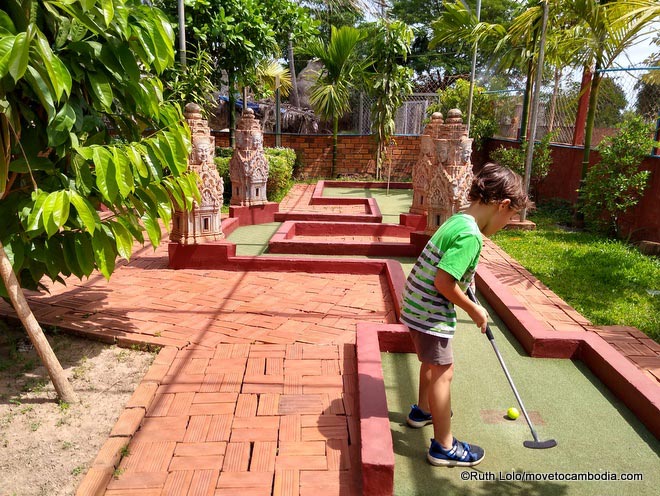 Angkor Wat Putt — where you can enjoy the temples of Angkor while playing a round of mini-golf.

The 14-hole course is in a lovely garden setting, filled with young banana trees and lots of shaded seating. From that shaded seating you’re free to ring a bell and get a beer or soda delivered. All of the major temples of Angkor are represented, and it’s hard not to be thrilled when you knock a ball up Angkor Wat while listening to the incongruous soundtrack of classic rock that’s always on.

In our post about what to do in Siem Reap with kids, Rachel wrote about taking her young children to Angkor Wat Putt. And certainly, it’s a great activity for kids. Let me be the first to say that I do not believe that miniature golf is a game that should be confined to childhood, and the Angkor Wat Putt course has a 51 par that is best competitively tackled by adults. Don’t worry, kids love it, too! 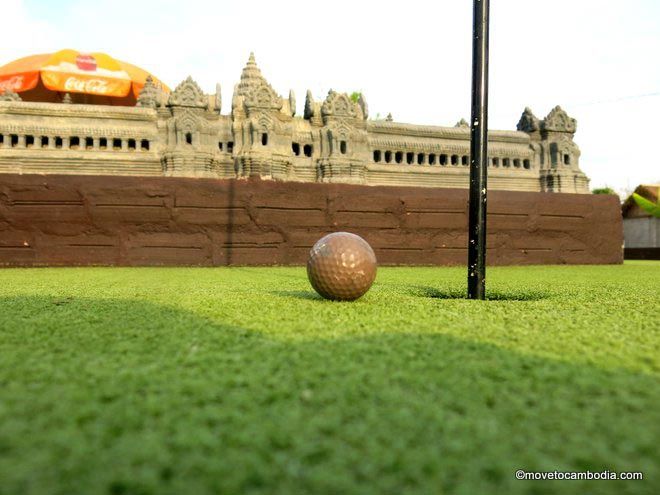 The course would not be described as easy, but there are potentials for holes-in-one, which win you a free drink! The best part is that they’ve got real fake grass for the putting green. I’ve seen some other short-lived mini-golf places in Cambodia that made you putt on concrete, and it’s just not the same.

Angkor Wat Putt is proper mini-golf. The place is run by former temple tour guide Tee (get it?), who admits that he had never played mini-golf before opening Angkor Wat Putt. He was given the idea by a tourist, and after researching it decided to make a course based on the temples of Angkor. Tee’s a very friendly, personable guy and these days is an excellent mini-golf player. If you’re trying to improve your game, watch Tee play a round and see where he banks his shots. 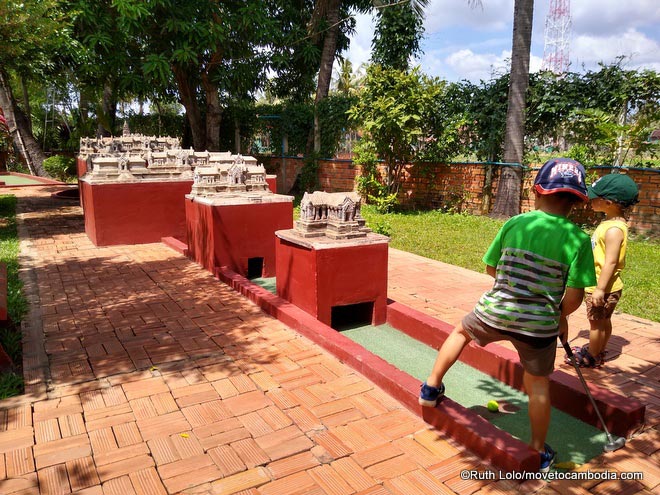 One of Siem Reap’s best activities for crazy golfers of all ages.

Angkor Wat Putt has changed locations from its original spot, but the new course a little bit outside of town is even better than the original with more greenery and landscaping, but all of the excellent original features are still there. While there is shaded seating, there’s still an awful lot of sunlight so I’d recommend skipping the midday round of mini golf and coming in the morning or afternoon. They’ve got bright lights and stay open until 8 p.m. for those who want to golf under the stars.

Games cost $5 for one round, $8 for two and $10 for three rounds. They offer discounts for students, children, and locals (including expats). They can also arrange for a pickup at your hotel for $2 per person.