Posted on May 12, 2014 by Steven Halcrow
Get a quote for expat health insurance

It is a widely accepted fact that the experience of moving house can be as stressful and upsetting as being pushed out of a plane or undergoing triple bypass surgery. The very thought of ripping your entire life out of one place, compacting it into a dark container on the back of a truck and dumping it down in another place to be unloaded whenever you can get around to it is enough to make even the most steadfast interior designer recoil in fear. 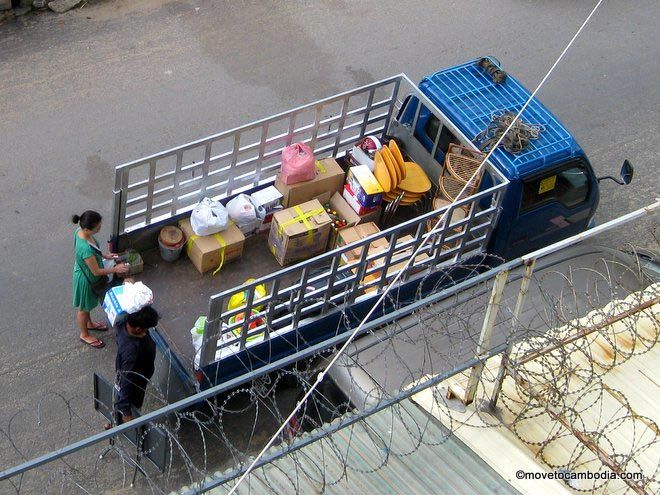 Moving day in Cambodia doesn’t have to be a nightmare.

If you’re just moving across town, you may require little more than a tuk tuk, depending on how much stuff you have. This is by far the cheapest option, and usually the tuk tuk driver will be more than happy to help you with the more physically demanding aspects of the move for an extra couple of dollars. A massive truck like the one shown above can be had for under $50, including labor. Taxis are more expensive to hire but offer more safety and comfort and are also suitable for moving small loads between cities (Phnom Penh to Siem Reap will set you back $70-80).

If you’re moving between Phnom Penh and Siem Reap and have more stuff that will fit into a taxi, you can hire a minivan. Don’t be put off by the fact that these minivans are often owned by tour companies and are not primarily used for removals, for $30 extra they will remove the seats to allow more space for your boxes.

You can hire men to help with the move through them, but again your local tuk tuk drivers and motodops will appreciate one more chance to make some money off of you. What you should pay them can be measured against how many flights of stairs they have to negotiate, how long it takes, and how sweaty and out of breath they are by the time they have finished. The going rate is usually between $5 and $20 per person.

We recently moved between Phnom Penh and Siem Reap and were lucky enough to be introduced to a fixer, an English-speaking local who can help to arrange everything in exchange for a fee. If need be he can also accompany you to the place in Phnom Penh where truck drivers wait for jobs, at Street 63 between Street 154 and Street 174. Your fixer will barter with the driver on your behalf and if you are moving from one city to another, he will agree to ride in the truck for an additional fee and a bus ticket home. He will act as overseer to make sure that your possessions arrive in one piece.

Our fixer put us onto the minivan company that we ended up using but the fact that they did not want to come round and assess the job made us worry that they weren’t credible movers. Because of these doubts, we shopped around and got quotes from a couple of the bigger moving/transporting companies.

TWD sent round a man who spoke very good English and he assessed the job. We found this comforting although we felt as though he was very keen to drag everything out and use as many guys as he thought he could get away with. After assuring us that our ‘priceless’ possessions would definitely not fit in a 15-seat van (which we later ended up using), he quoted us $450 for 10 cubic meters loaded onto a 2.5 tonne truck, five laborers in Phnom Penh and two in Siem Reap and a total of around 12 hours to finish the job.

We also talked to World Angkor who specialize in international cargo but who also deal with  household moves. He quoted us $650 for the same job only with his estimate that we only had 6 cubic meters. Both companies presented a legitimate face but accidents and breakages can occur during any move. A friend with more experience of moving in Cambodia advised us that problems were just as likely with the more expensive companies than the cheap ones, and the extra money seemed to be getting spent on nothing more than a guy with long fingernails on the other end of the line apologizing if something was to go horribly wrong.

We could not have been happier with the man and the minivan that we hired through Sopheap Bung (012 894 155; 098 894 155). Our driver Chantha was punctual and friendly and only cost $180. Our possessions, which both moving companies assured us needed a 2.5 ton truck, fit in the 15-seat minivan (but just barely). TWD wanted to send two additional men to help us unload the truck, yet we managed to do it ourselves in less than 20 minutes with minimal help from the driver. All in all, the price quotes we got from the moving companies were grossly inflated.

We ended up paying $260 in total ($60 in labor for tuk tuk drivers, plus a $20 tip for our driver). All in all, despite the weeks of anguish beforehand, it was a relatively painless move.