Posted on October 26, 2019 by Lina Goldberg
Get a quote for expat health insurance

If you’re looking for the most painless way to cross the Thailand-Cambodia border overland, the direct bus from Bangkok to Siem Reap is the way to go. There are currently only three truly direct buses (meaning you leave your luggage on the bus while you cross the border and catch the same bus on the other side). Not having to switch buses takes a major headache out of the journey. Nattakan, the first company to ply this route, is the least expensive option. It had been a while since I took this trip with them, so I bought a ticket and tried it out.

Here’s the 2019 report on the Nattakan direct bus from Bangkok to Siem Reap: 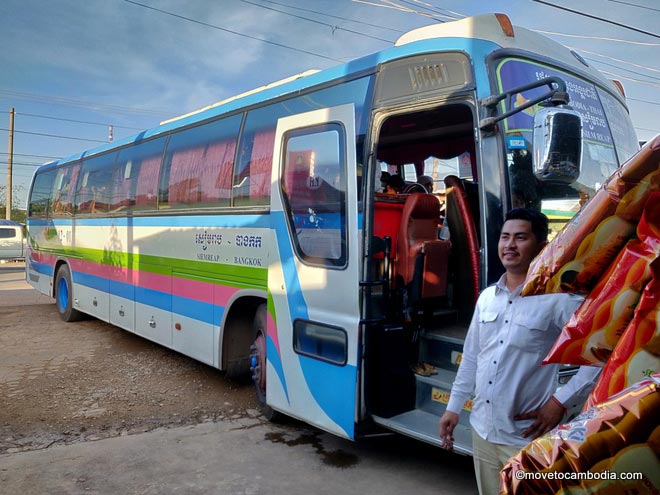 Because there are a few segments to this journey, I’ll break this post up into sections to make it easier to digest.

The easiest way to get tickets for the Bangkok direct bus is to buy a ticket online, which allows you to reserve a seat in advance (pro tip, get as close to the front as possible, so you’ll be as far from the toilet as possible). This also allows you to book further in advance, which is a good idea during busy times like the December-January period which always sells out. 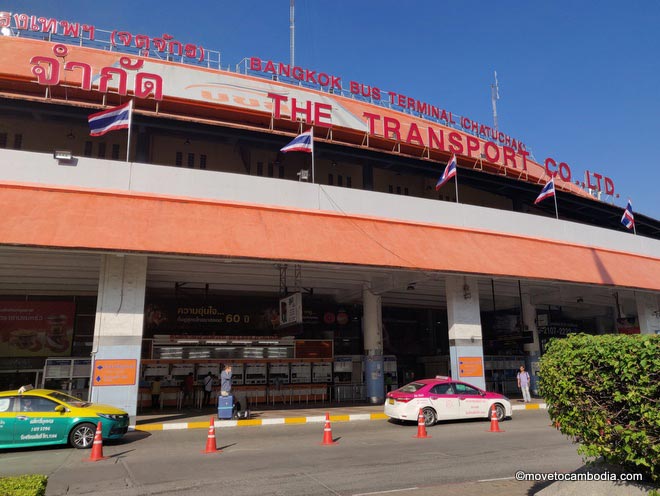 Tickets for Nattakan can also be purchased at the Northern bus terminal in Bangkok, sometimes called Mo Chit 2 bus terminal, sometimes called Chatuchak bus terminal. On the ground floor a booth labeled The Transport Co, Ltd. sells the Bangkok to Siem Reap tickets for less than you’ll pay online. However, because they are almost always sold out, you’ll need to go to the bus station at least a day or two in advance, making the trip a more expensive way to get a ticket than the online option unless you’re already in the area. A recent one-way taxi fare to the bus station was around 150 baht (about $4.25) from Sukhumvit, but can be double that during peak times. 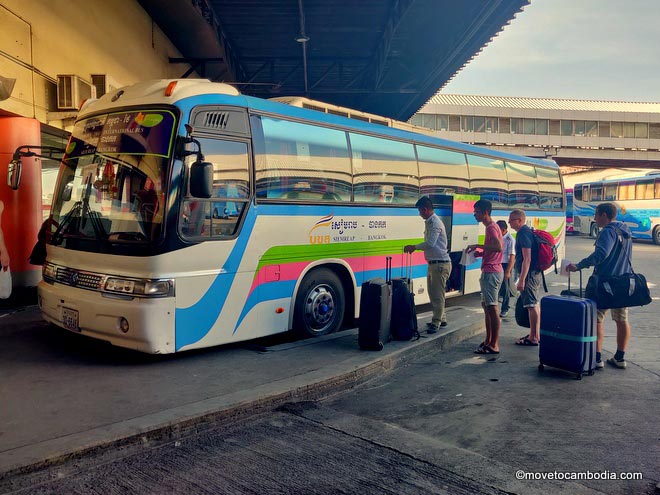 Loading up in Bangkok before setting off towards Cambodia.

There is only one bus per day, at 9 a.m. from Bangkok to Siem Reap.

From Siem Reap to Bangkok, the bus leaves at 8 a.m.

The Nattakan buses are old but comfortable 38-seaters with an onboard toilet. A charming sign asks that you not defecate in the toilet, and for those who are not seasoned bus riders, I suggest avoiding it altogether if at all possible. And on that note, the toilet often reeks of urine and the smell is not contained to the bathroom, so try and avoid the rows directly in front and behind it (ie. rows 8 to 10 are to be avoided).

Seats on the bus are comfortable and have a generous recline. 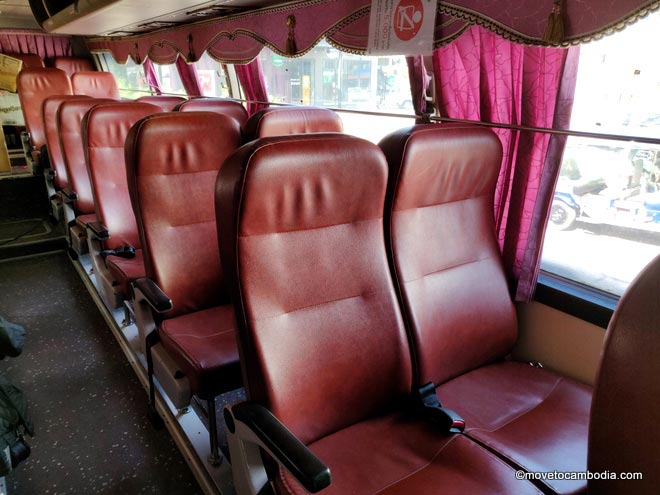 The interior of the Nattakan direct bus.

The journey from Bangkok to Siem Reap

On a recent trip we arrived at the station about 20 minutes early (give yourself extra time to get there as Bangkok traffic can be unpredictable). We ended up leaving 10 minutes late and there was some confusion about seats, but luckily we had booked ours in advance.

One on the bus, a clipboard will be passed around and everyone is asked to fill out their name, age, nationality, and passport details. Don’t worry, this is standard.

We were at the border in about 4.5 hours, but this part of the trip can take longer.

Despite there being a sign in the bus station not not trust anyone selling visas, and another one when we bought our ticket online saying that no Nattakan staff members should try and sell us visas, our first stop of the trip was in Aranyaprathet where one of the Nattakan staff tried to sell us overpriced visas for 1400 baht ($45). Know that this is just a way for them to make extra money, and you should ignore them. There was a toilet at the station in Aranyaprathet, and then we got back on the bus to head to the border, which was about 20 minutes away.

Before we got to the border, we were given hot food from 7-11, which were different types of fried rice. It is a relatively small portion and you are not given a choice in what you get, although they did have a vegetarian option. Water is supposed to be provided, but on this trip it was not, so it’s probably best to bring your own food and drink. 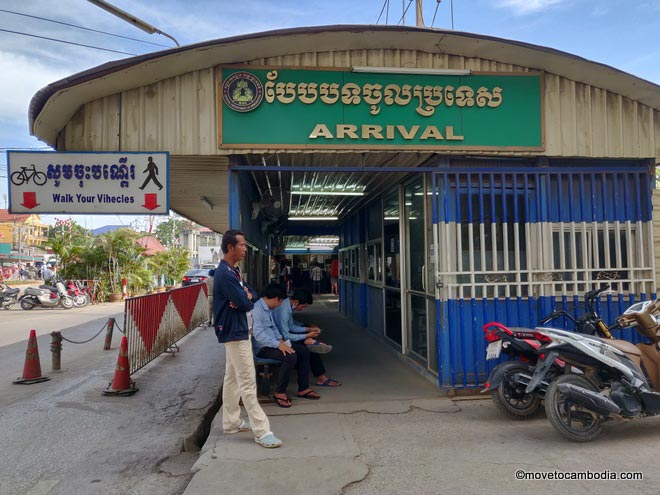 The land border from Bangkok to Siem Reap is nothing to be afraid of.

Crossing the border from Bangkok to Siem Reap

Because this is a direct bus, you can leave your luggage in the storage on the bus, but be sure to take anything in the actual bus cabin with you. Before we disembarked, we were given necklaces that identified us as Nattakan customers. This is actually quite handy because the bus and taxi touts leave you alone, and I think even the visa people seem to be nicer to Nattakan customers than those traveling solo. We then walked across the border, got stamped out of Thailand, got our Cambodia visas (for a detailed explanation of the border crossing, please see the ‘Crossing the border from Thailand to Cambodia’ blog post), and met the bus, which was parked in front of the Grand Diamond Casino.

The entire process took less than an hour, but depending on the time of day and mood of the visa officers, this part of the trip can take up to two hours. Feel free to head into Chillax Cafe in the Grand Diamond Casino, which is where the bus stops in front of, to use the toilet or get a drink if you’re one of the first through, but check with the Nattakan staff member waiting at the bus to make sure you’ll have enough time.

Note that the bus does not leave until everyone gets their visas. This is the point that the people who paid $45 to Nattakan for “express visas” realize that they still have to wait just as long to get to Siem Reap as everyone who got the $30 visas the official way. 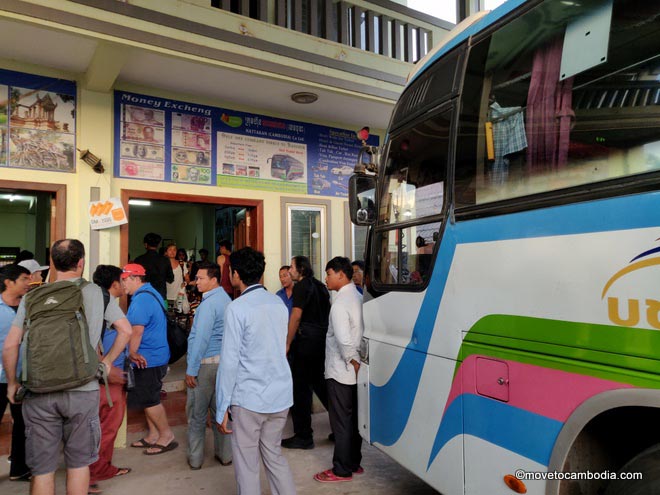 The scrum of tuk tuk drivers outside the Nattakan office in Siem Reap on arrival.

About 50 minutes before we got to Siem Reap, we stopped at a pretty lame rest stop called Seng Lyda. There’s a toilet there (bring your own paper) and a lot of overpriced garbage that you shouldn’t buy. You’ll be in Siem Reap soon. The drivers just stop here because they get commissions on your purchases.

Once we arrived at the bus company office in Siem Reap (here’s a map of where you arrive) we were surrounded by tuk tuk drivers offering free trips to your hotel. The reason they offer them for free is because they are hoping to talk you into a temple tour the next day. If you are not planning on taking a temple tour, you should not accept a free hotel drop-off. You can use an app to get your own tuk tuk, or negotiate a price for the trip.

The Nattakan staff will unload your baggage into the office, and then you can get it there.

I’ve done this journey several times before and this was a pretty standard trip, although usually there is a stop at 7-11 before the border. I assume we didn’t stop there this time because we were making good time (and 7-11 doesn’t give the drivers commission).

Overall, I think Giant Ibis offers a much better product with better buses and better service, but it is more expensive ($35 compared to $28). You can read my full Giant Ibis review here. For those who are price sensitive, the Nattakan trip is perfectly adequate, although not luxurious.

Since then, I’ve now taken the third bus that does this route direct, and at $24 or $25, Travel Mart easily beats Nattakan. Read my full review of the Travel Mart bus from Bangkok to Siem Reap.

6 Responses to Review: Nattakan direct bus from Bangkok to Siem Reap (and vice-versa)